As Alan explained in his talk. There are basically only two things you can do with your reads - Alignment or assembly. Running the programs that perform these tasks is relatively simple, the hard part is extracting and interpreting the information afterwards.

In here you will find your reads in fastq format (usually denoted as fastq.gz). There are two files (read1 and it’s partner read2). When you receive sequencing data it is often raw. This means that nothing has been done to it. It is quite common that you need to trim adapters and possibly quality trim (based on Q-score, see Alan’s talk). The data that you have been given here is adaptor trimmed and quality trimmed for your convenience. It is something to bear in mind when you receive data as untrimmed reads might affect your results. To trim reads we use Trimmomatic (which is installed on your GVL) but there are many tools available.

###Assemblies
In an ideal world all sequenced genomes would assemble into one contig and their respective plasmids. Most of the reference genomes that are available like this have either been sanger sequenced, closed (using sanger sequencing), or sequenced using long read technology.

Sanger sequencing of a whole genome is costly and time consuming. Closing a fragmented genome comprised of multiple contigs can require quite a lot of work, designing primers for the edges of the contigs and performing PCR across the gaps. Long read technology is available using PacBio or Oxford nanopore instruments (for example), however, the former is at least 10 times more expensive than short read sequencing and the latter hasn’t been rolled out for public use…yet.

Most sequencing projects involve Illumina technology (discussed in Alan’s talk). This produces short reads, ranging between 36-250bp. Assembly using this type of data often results in many fragments rather than a circularised genome. These fragments are called contigs.

You tend to get a break in the assembly at repetitive regions (such as tandem repeats or genes that have multiple copies in the genome, such as 16s rRNA). The reads just aren’t long enough to span these regions.

The data that you are going to play with today is actually 250bp paired-end. This means that each read is 250bp and has a partner, this can improve your assembly because you have two reads that you know approximately know how far they are from one another. This sometimes allows you to span certain repetitive regions, thus improving the assembly.

Most bioinformatics tools don’t have a fancy interface and require you to run them from the command line.

We are going to start by using a piece of software called SPAdes. This does not need a reference genome, it shreds the reads into smaller pieces called k-mers and aligns these to one another using a de bruijn graph. If you are interested in how this works look here. An assembly without a reference is called a de novo assembly.

There are many parameters that can be used with spades, the link to SPAdes above elaborates on these, or you can type:

The parameters that we used are:

Once the assembly has finished lets have a look at the output that SPAdes spit out.

For the purposes of this tutorial we are just going to look at contigs.fasta

contigs.fasta, as the name suggests, contains your assembled contigs in multifasta format.

There are a few things that we look at to assess the quality of an assembly (other than the number of reads). There is a piece of software called quast which gives some general assembly statistics. Unfortunately…it isn’t installed on your machine

But wait, this is your machine, you can install software yourselves! Let’s have a go.

WELL DONE! You installed your first piece of software!

Now let’s have a look at the quality of your genome, we’ll include another assembly sem_assembly/sem.fasta so that we can compare their stats.

You have already tried web blast, now we are going to perform it on the command line to try to figure out whatspecies your assembly belongs to.

This command has taken each contig and blasted it against the entire nucleotide database and then taken the top hit and the first hsp. This has been saved in a file called 3771_blast_contigs.out. Here is an example of the output, you might find that your top hits are somewhat different…

Now we know what our genome is, let’s blast against it’s reference and compare. I have downloaded the reference for your convenience.

We can visualise this in ACT. On your desktop click the button in the bottom left corner and then select Run (second from bottom of list) 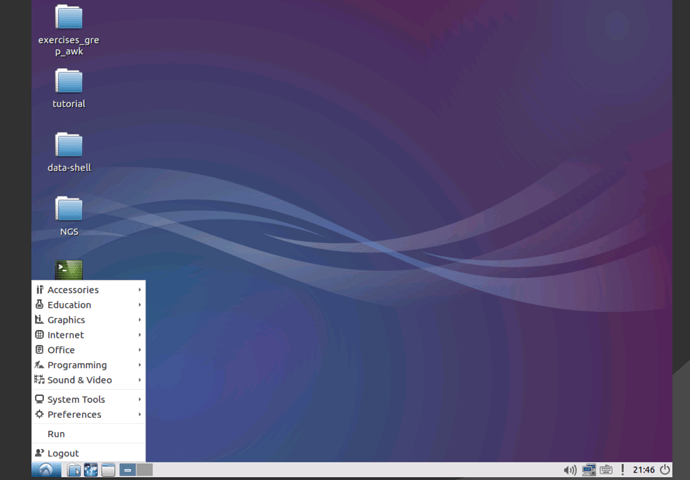 Type in act and then press return. 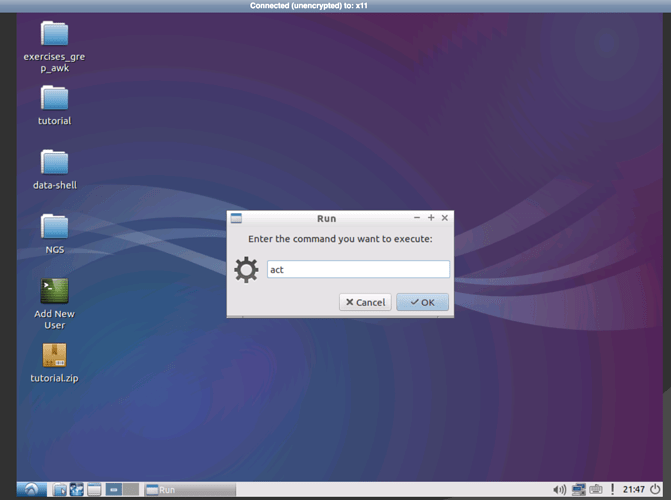 You will now see the menu for act.

How does that look? Probably not useful!

This command tells abacas to align and order the contigs in contigs.fasta against the reference.

How does the genome comparison look now?

Now that we have a reasonable looking assembly let’s annotate it. Luckily there is a tool to do this too!

Prokka takes the contigs, predicts features such as RNAs and CDS. The CDS are then compared to a database of existing proteins to get the annotation.

You can now open the annotation in artemis. Try opening 3771_PROKKA/3771.gbk in artemis (the program art). You can find artemis the same way that you found the act program (above) but type art.

What’s wrong with this annotation?

At MicrobesNG we always sequence a control (E.coli) on every sequencing run. The researcher that gets does the extractions doesn’t know exactly which strain this is derived from (they think it’s one of two). We want to know which reference is closest to our sample. Further to this, periodically, when we run out of DNA we need to re-extract more DNA. We have samples from two different extractions. we want to see if there are differences between these two controls, are more mutations introduced over time?

The normal method of calling SNPs is to align to the reference (using something like bwa or tophat), sort and manipulate the alignment file (.bam), look for SNPs/indels using a variant caller (like freebayes or varscan). Nick is going to show you some worked examples with these tools.

Today, we are going to use SNIPPY which is essentially a wrapper for the tasks mentioned above (it runs all of the software for you). SNIPPY not only does your alignment but performs variant calling too! We are going to use default parameters when rerun SNIPPY with the exception that we want to save any reads that didn’t map to the reference. Parameters that users might consider tweaking are:

Note: You can actually use SNIPPY to create a core genome and create a phylogenetic tree too! If you have multiple samples.

If you have set_1

Look in folder W3110_snippy, there are lots of file formats. The formats of interest in this tutorial are:

Bam - is the alignment of all the reads
name.unmapped.fastq.gz is all the reads that did not map to the reference.
snps.tab shows all of your snps in the context of the genome.

Which is a better reference?

Finally, let’s have a go at opening these in IGV.